The Gautrain is an eighty kilometers long mass rapid transit railway system in Gauteng province in South Africa. It is Africa’s first high speed train and it links Johannesburg, Pretoria, and the OR Tambo international airport.

The main reason as to why this railway system was built was to relieve the traffic congestion that was constantly experienced along the Johannesburg-Pretoria corridor. This railway system was also meant to provide commuters with a practical rail transportation service mainly because Johannesburg has limited public transport infrastructure. All of the stations were expected to be operational as from 2nd August 2011 with the exception of the Johannesburg park station that was experiencing problems which needed to be addressed before the station could be opened. 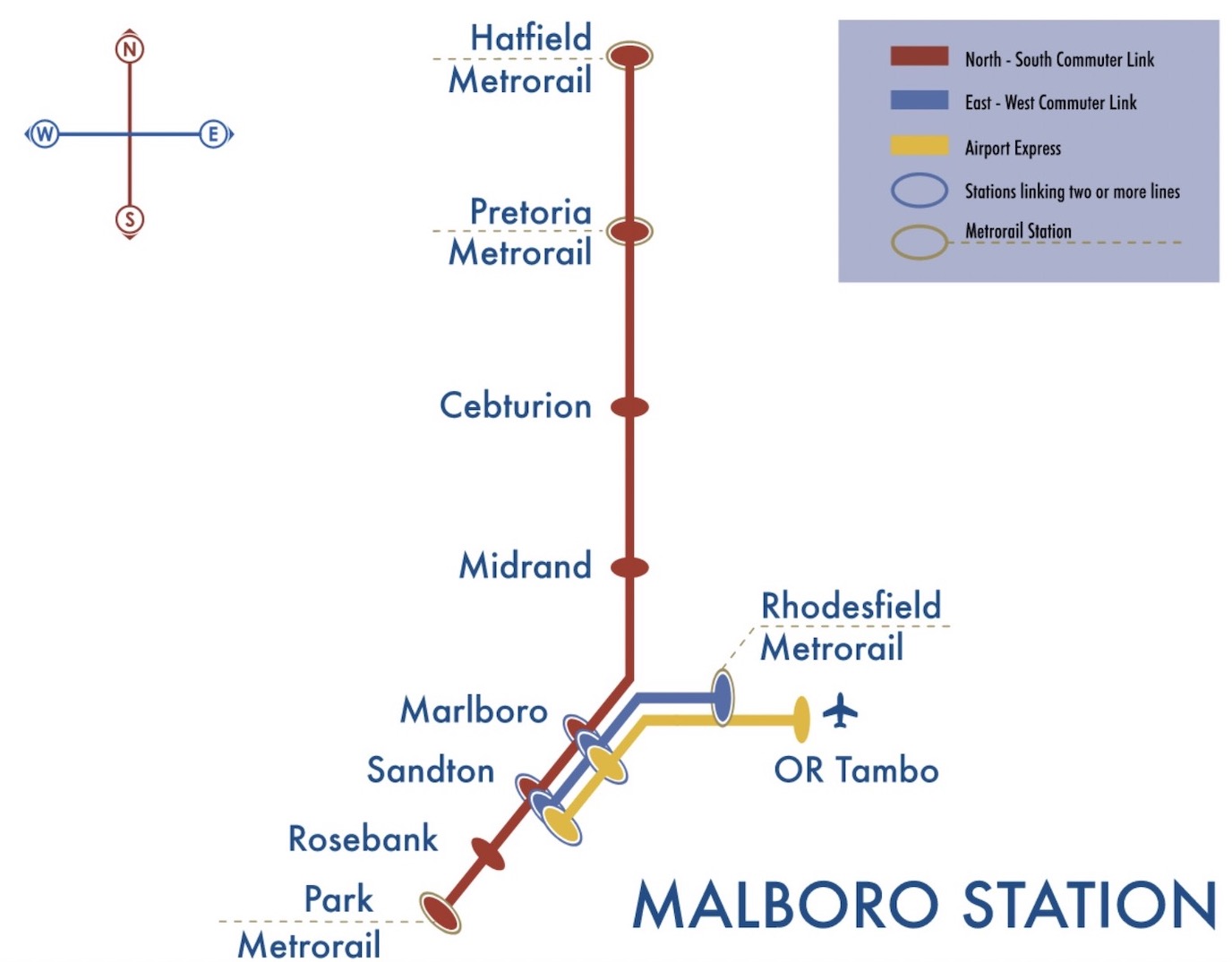 OR Tambo International Airport to Sandton

This line services the route from Sandton Station to Rhodesfield Station, and is indicated by the blue line on the route map. The respective stops are as follows:• Sandton• Marlboro• Rhodesfield

Sandton to OR Tambo International Airport

The “Airport Service” operates exclusively between Sandton, Marlboro and OR Tambo International Airport. The “Commuter Service” is targeted at general commuters that need to travel between the stations in the North (Hatfield through to Midrand) as well as the Southern stations (Park, Rosebank and Sandton) and also includes Marlboro and Rhodesfield on the East line.

The following periods are the peak periods during Business Days (Monday to Friday):

Please note that the Ticket Vending Machine offers change in coins only.

You may purchase your Gautrain Gold Card via the following payment methods at either the Ticket Vending Machine or the Ticket Office:
• Cash
• Credit card
• Debit card

During the installation of the Gautrain concerns for safety and security were given the highest priority, and it is worth noting that the entire train system adheres to the highest international standards. The train is also served by highly trained personnel. The train system is also integrated in such a way that it offers connectivity to the Sandton, Rosebank, Pretoria, Hatfield and Rhodesfield stations, and the car rental facilities at Sandton as well. Further, the train has a reliable timetable and thus making certain that you can never miss your flight from the OR Tambo International Airport. Additionally, the Gautrain only takes twelve minutes to travel from Sandton to the airport.

The rail link from the Johannesburg international airport serves a number of Johannesburg suburbs and Pretoria as well. The train station also offers parking and bus connections. The car park is usually opened as from 5AM to 9PM every day. The station that serves the airport can be found on the upper level between terminals A & B. You can easily find it by following the signs provided in the airport. The airport line, commonly referred to as the East-West commuter line, usually runs OR Tambo Airport – Marlboro – Sandton. However, you have the option of transferring to the North-South Commuter line at Marlboro or Sandton.

A single trip on the Gautrain will cost you anywhere from R20-R50 for one person and this depends on your destination. However, children under three years old usually travel free of charge.

The next time you are in Johannesburg you can try to forget using the taxis or the minivans as you may take forever to get to your destination; use the Gautrain instead!

Gautrain is a rail system in South Africa for commuters that connects several important locations including Pretoria, Hatfield and Johannesburg, and also provides a separate airport service that connects Marlboro and Sandton to O .R. Tambo International Airport.

How many stations are in the Gautrain system?

There are 10 railway stations in total servicing the Gautrain network.

Is Gautrain only a railway service?

What are the Gautrain hours of operation?

Gautrain starts daily at 5.05am and 8.30pm, with frequent services between those times.

Is there car parking available at Gautrain stations?

Yes, you will find car parking options at every station except for the station that serves O.R. Tambo International Airport, also known simply as Johannesburg Airport.

How frequently do Gautrain services run?

There are frequent train services every day on both rail systems, operating at least every 12 minutes at peak times of high travel demand, and every 20 minutes during non-peak periods.

How fast does the Gautrain railway travel?

The train can reach a speed of up to 100 miles per hour (about 160 kilometers an hour), making for very quick journeys -- for example, it takes about 35 minutes when taking the Gautrain between Pretoria and Johannesburg, compared to about one hour when driving.

What do I need to be able to use the Gautrain?

You need to get a Gautrain card on which you’ll load money, and then use that card when boarding trains. You need to swipe this card through the turnstile at the station where you board your train, and also swipe it at the turnstile at your destination station.

Where can I obtain a Gautrain card?

When you are at a Gautrain station, look for either the ticket office where you can buy a Gautrain card from a station employee, or use an automated ticket vending machine. You are able to use either bank cards or cash to pay for your initial Gautrain card and fare. The minimum amount of money that you must have on a Gautrain card is 30 South African Rand (equivalent to about $2), and you can add more money to your card via the machines or the ticket office.

Can I ride the Gautrain without getting a Gautrain card?